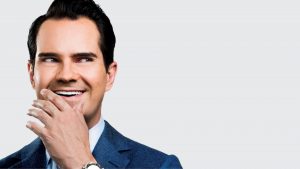 The face of 8 out of 10 Cats and 8 Out Of 10 Cats Does Countdown is back on the road, once again and now, you can see him at the Warwick Arts Centre. Often referred to as ‘the hardest working man in comedy’, Jimmy has so far performed his live stand-up tour shows to over 2 million people across 4 continents and his DVDs have sold more than 1.2 million copies. Jimmy’s brand new show contains jokes about all kinds of terrible things.
Terrible things that might have affected you or people you know and love.
But they’re just jokes – they are not the terrible things.
Having political correctness at a comedy show is like having health and safety at a rodeo.
Now you’ve been warned!